As far as trade shows are concerned, setup days aren’t really that exciting, but they are a lot of work. We unpack the crate and take a few hours to configure everything, crossing our fingers that every cable and connector made it into the box. For us, if everything goes well, we can have our arrangement dialed in and be headed out the door before lunch. 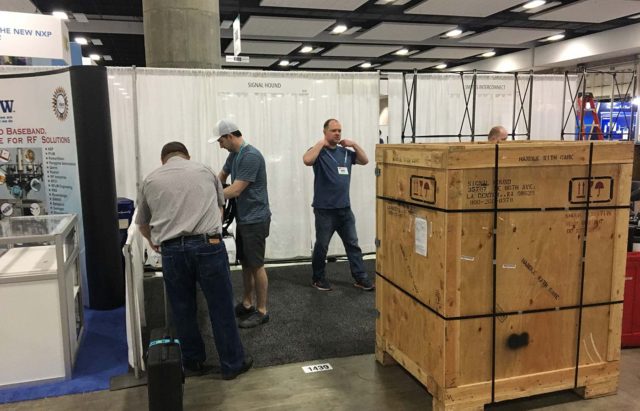 Hmmm… where to begin…?

For the most part it went well this year. We had a few unforeseen issues – nothing major really – but we did have a little problem bringing our new SM200A up on a demo PC. After AJ and Justin sorted out the code issues and repaired them on-site, the new analyzer was up and running at full steam, locating signals all over the convention hall at blazing fast speeds. Wi-fi, Bluetooth, LTE – if it was there and under 20 GHz, the SM200A could find it. One cool thing about being in Honolulu is that there is a decent amount of Navy-based radar in the area, which was easily located and visualized with the SM200A connected to a directional antenna – kind of fun to see in action.

And although it was a little unnerving at first, it was cool to watch our engineers troubleshoot and fix the issues with the new device right there in the booth, and work out a few other things during the process. It was kind of like watching a live action support session, just like you’d get if you call in with issues, but for ourselves this time. AJ, Justin, and Bruce love this work, and it’s very apparent when watching the team in action. 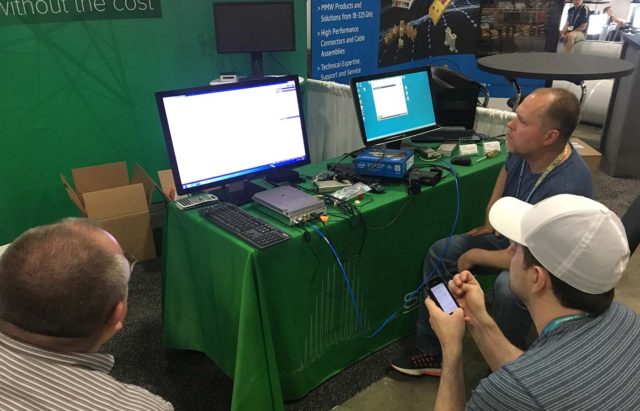 Live-action troubleshooting on the show floor

We can’t wait for tomorrow when the show officially opens to the attendees. We love hearing what features people need and or/want for their various applications, and visiting with both current and future customers. If you’re able to attend the show, swing by booth #1439.