Looking ahead in 2018: New Signal Hound products, and a move to our new facility

Well folks, another year is behind us, and we’re only looking at eleven months or so until another year passes us by. Man, time seems to be flying right now.

I purposely waited until the beginning of February to post this because it’s easy to be overly optimistic with goals for the new year right out of the chute. Personally, I tend to have more bounce in my step as I come into the office the first week of January, filled with anticipation and driven to maintain my new goals. By the first part of February, however, this positivity has been beaten out of me by reality, and I’m left to focus on more reasonable ambitions.

I think our company behaves largely the same way – with lofty goals and grand expectations going into the new year– and by now, we (hopefully) have a rather solid idea of what to expect.

So, what does a realistic view of 2018 look like for Signal Hound? Turns out that it’s looking pretty cool!

As was discussed in a recent post, our new 20 GHz spectrum analyzer, the SM200A, will be available the first quarter of this year. This analyzer is a huge step for us, and we wanted it to be absolutely perfect right out of the gate. It’s been in development for a few years, and early beta testers are loving what they see. 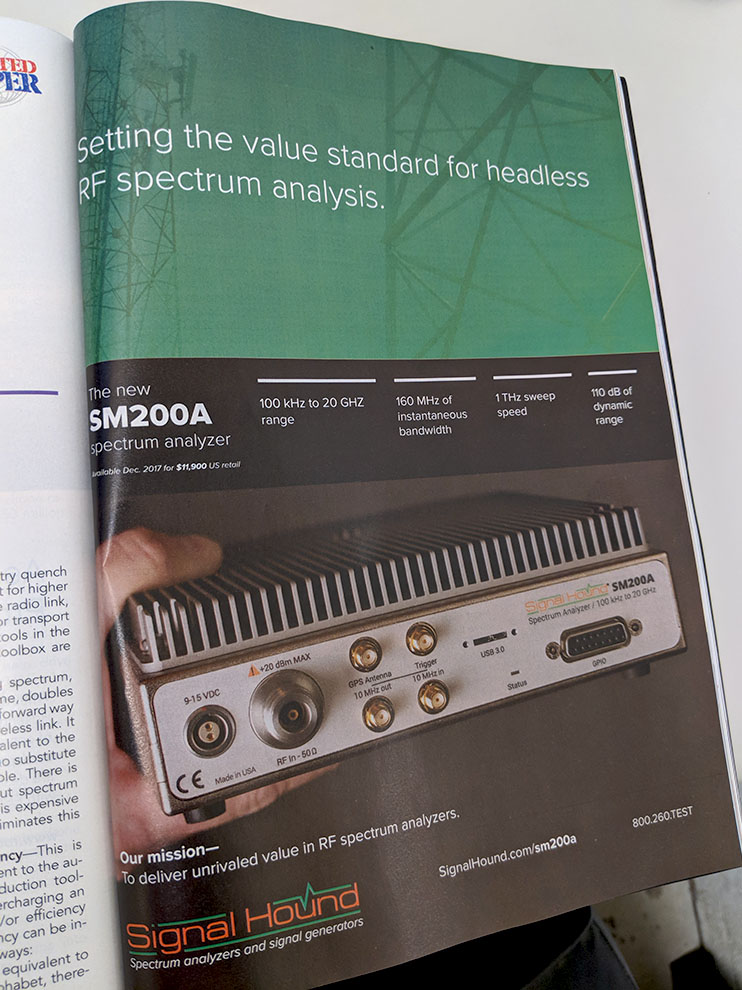 An ad for the SM200A in Microwave Journal.

With 160 MHz of instantaneous bandwidth, 110 dB of dynamic range, and 1 THz/sec sweep speeds the SM200A is unlike anything we’ve created before. But this analyzer is still a Signal Hound, which means the absolute most performance you can get for your money, and top-notch build quality and support. We’re really excited to get the SM to market around late February/early March and begin working with our customers in their variety of applications.

We’ll also be shipping another smaller device this year, which is a USB-powered phase noise clock standard. The device is similar in form factor to our SA-series devices and is a handy tool for any RF bench. We’re even using them to test our SM200A analyzer. 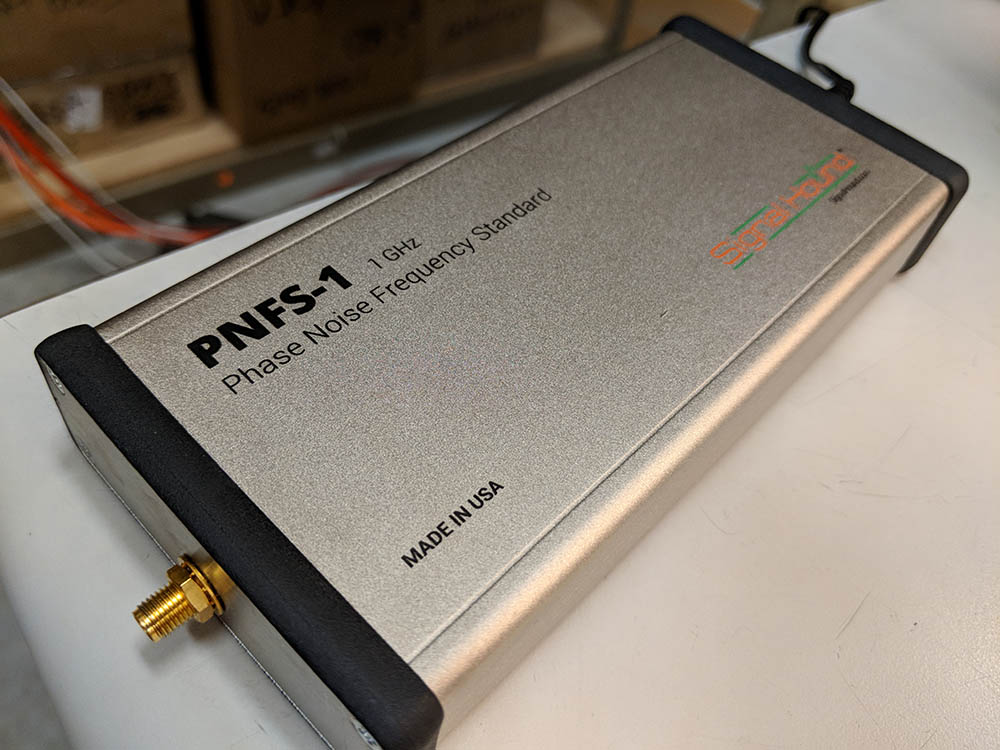 Not its real name, but a clock standard nonetheless. Ship date TBD, as there’s only one in existence.

While we’re not expecting to ship a ton of these little devices, the performance is exceptional for a device of this type and cost. If you’re in the market for a phase noise clock standard, be sure to check back with us later this year.

A new place to call home

With any new product comes the need for additional resources, and Signal Hound’s biggest need is… space! Since the SA44 was introduced in 2010 we’ve added 5 (almost 6) new devices, plus all the associated assembly lines, developers, support, and resources that come with each new device. In 2016 it was decided that even after all the juggling and re-organizing, Signal Hound needs more room in order to scale successfully. Between product design and operations management tasks, our CEO Bruce Devine set out to find a company that could bring his vision for Signal Hound’s future to reality.

After months of effort, Signal Hound partnered with Camas, WA based contractor, Robertson & Olson, and began the daunting task of conceptualizing and designing a future for Signal Hound. Land has now been purchased in a light industrial park in a neighboring town and we’re forging ahead! 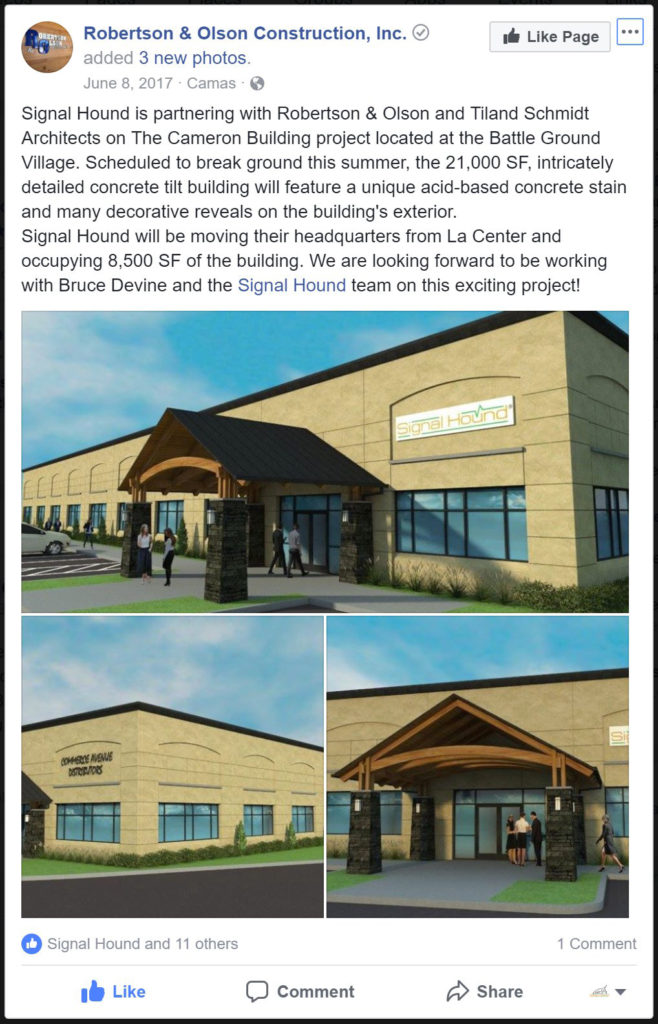 Originally slated to break ground in August of 2017, the project was put on a temporary hold so we could focus our energy on getting the SM200A spectrum analyzer finished and ready for market. The burden of trying to take on a large-scale construction project and get the most complex device we’ve ever created out the door was too straining for Signal Hound resources, so we set the new building project back just a bit.

As it currently stands, we’re on track to break ground this spring and build through the summer and fall so we’re ready to start 2019 in the new space. We’re looking forward to having the necessary resources to ramp production, double down on product refinement and development, and bring in some new talent.

So those are the big items for Signal Hound in 2018. We look forward to an extremely busy year full of changes to help take our company to the next level, which means more capable and refined RF analyzers and signal generators, backed by top-notch support for all current and future customers. We are excited about the little mark we’ve made in the test equipment industry thus far. We may get to make it just a bit bigger this year.